Given the series’ notoriously high levels of testosterone, Gears of War 4 is surprisingly focused on matriarchy. Its female characters have always been on equal footing with their male counterparts, but in this installment they are more central to the narrative. Humanity is rebuilding, relying on maternity during a time of renewal and rebirth.

The game makes clear from the outset that this is the basis for the story. We are introduced to JD and Kait as they examine a chrysalis, foreshadowing the Locust’s rebirth via transformed humans. They are on a mission to break into the heart of a human settlement, which they do so by cutting through its maternity wing.

At the core of each human settlement is the Fabricator, an exciting new gameplay mechanism which fits neatly into the overarching theme as it draws comparisons between industry and reproduction. It is basically a black box from which the essential elements of society emerge, consuming raw materials and giving birth to the future. The only thing the Fabricator cannot make is a person.

Rebuilding civilization after 17 years of total war requires large scale production of people as well as cities. Consequently, COG propoganda aggressively promotes maternity. “Find your purpose,” insists a poster of a mother holding her baby. “We build for them.” Winged women herald the rebirth of human society, with a giant bronze matriarch upholding the COG emblem at the center of every new settlement. 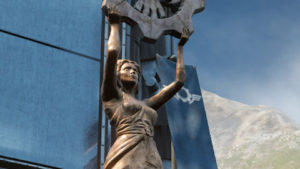 The central authority figures in the game are female. First Minister Jinn, who once helmed the Ministry of Procreation, was chosen to lead the Coalition of Ordered Governments. Reyna Diaz, Kait’s mother, is the tenacious leader of an Outsider settlement, until she is captured by the Swarm to be mutated into the next Locust queen.

And the absence of a strong matriarchal figure is deeply, painfully felt, not only by the Locust who without their queen were dormant for decades, but by the Fenix family. Anya, JD’s mother, died when he was a boy. Their estate lies in shambles, with Marcus, the series’ central hero, now a widower residing in a spartan guest house, more gruff and grim than ever.

JD’s greatest test is facing his parents’ mortality. Still mourning his mother, he must rescue his father, as Marcus is taken by the Swarm, a Locust revival predicated on the transformation of humans into monsters. Their main mechanism of reproduction is to capture live hosts via Snatchers, a beast that devours people with its belly in a sort of inverted birth, then takes them to the hive for incubation.

The Snatcher that captures Marcus leads JD and his squad deep underground. In classical narrative terms, they are approaching the innermost cave, where the hero must face his greatest fear. The cave is the space between life and death. And it is a place of rebirth. In that regard, this cave is not unlike the womb. This one in particular has hundreds of juvenile Swarm gestating in membranous pods, including what remains of Marcus Fenix.

When JD finds his freshly implanted pod, he performs a Lancer C-section, chainsawing his dad free of the Swarm incubator. When he emerges, his body is limp, his look vacant. Even though the scene mirrors a tragic death from the previous instalment, it should be no surprise that Marcus cheats death. His name is Fenix, after all. When he comes to, the rocky relationship between father and son begins to heal, this physical rebirth renewing their emotional bond.

This ordeal is repeated at the end of the game, when they find Kait’s mother held captive inside a cave. JD symbolically births his father, but Kait must effectively abort her mother. Like an embryo implanted in the uterine lining, Reyna gestates amongst a mass of vessels so that she may be reborn as the next Locust Queen. Detached prematurely, she will die, so they must make peace with death rather than face a worse fate. By the end of the game, both Kait and JD have lost their mothers.

But the blood of the covenant is thicker than the water of the womb. Though he has no surviving relatives besides his father, JD did not grow up without a support network. Marcus’s brothers in arms, Cole and Baird, act as uncles to young James. Similarly, Kait’s uncle Oscar teaches her to shoot and fight after her father’s death. When Baird comes to the rescue in the game’s final act, he does so in a tactically and thematically profound way, with towering humanoid mecha.

On the surface, this robot rampage is a thrilling reward for grinding through many methodical skirmishes. More deeply, these giant metal humanoids represent Kait and JD’s dead and dying mothers. To operate these mechanized surrogates, the pilots climb into their torsos, returning to the safety of the womb. If this seems like a stretch, consider that surrogacy is central to the story, with the Swarm seeking human hosts and a human queen to lead the hive. And the entire game revolves around rebirth, as its introductory sequence tells you in no uncertain terms.

Less literally than Marcus Fenix’s rebirth, Kait and JD’s come through their metal surrogates and a valiant effort to save their parents, which will help them come to terms with the losses they suffered. With that, the game’s biggest, dumbest action sequence supplies symbolism and structure, elegantly encapsulating these core themes. On the surface, Gears 4 is typically triple-A with few narrative risks. But dig a little deeper and you’ll find the thematic richness you’d expect of a great novel.

If the action-packed, hyper-masculine world of Gears can provide fertile ground for maternal symbolism, we should seek such sophisticated storytelling from more games. It doesn’t have to define or overwhelm the experience. This is the same fun, gratuitously violent game it was ten years ago, but the visual language woven in and out of its every aspect can deepen your connection to its world and characters.